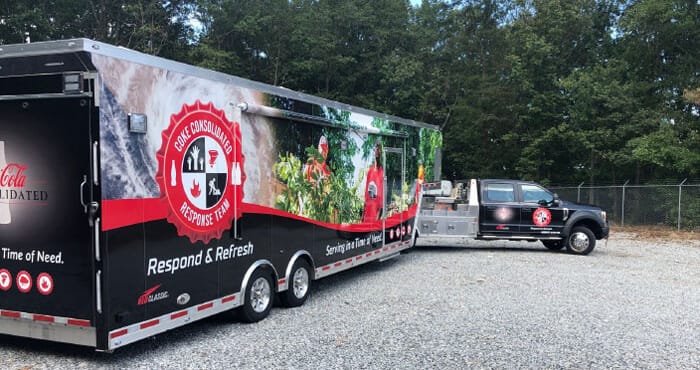 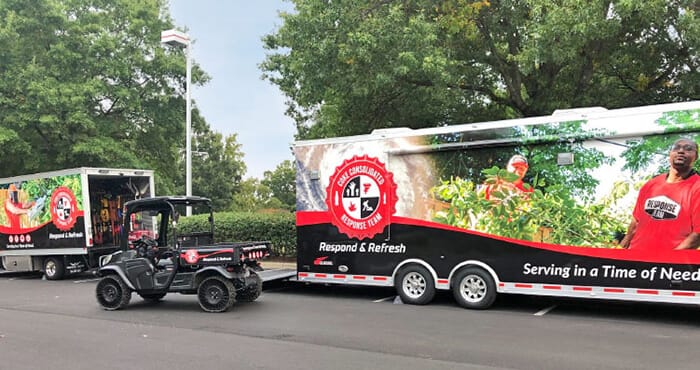 This challenging and creative project involved creating eye-catching artwork for a fleet of Coca-Cola vehicles. The vehicles included a truck, semi trailer, van, and off-road vehicle.

The Coke Rapid Response team is a division of the Coca-Cola Consolidated company. This volunteer employee team responds to natural disasters affecting other employees, and helps them clean and rebuild their properties after a natural disaster strikes. A new logo was created for this division of the company, and they wanted to re-wrap all their vehicles with brand new designs.

The vehicle wraps needed to contain several logos, icons, taglines, team images, and photos of natural disasters to showcase the type of work the team does. I combined team photos with natural disaster visuals by blending them together in Photoshop. This also helped address the issue of the photos not being large enough resolution for a semi. By placing the images side-by-side and blending them together, the images became large enough to cover the entire side of the semi trailer.

I created artwork for all sides of the vehicles, including the roofs and hoods. When designing, I had to ensure important visual details like logos and faces didn’t overlap vents or other vehicle trimmings. Templates were provided for some of the the vehicles, but for others, I created custom dielines based on images and the vehicles’ measurements. I also needed to re-draw some of the logos and icons due to the original files being too small for printing at such a large size.